What a Doberman is…

What a Doberman is NOT…

The Doberman is a medium sized dog with a square and very muscular, powerful build. They are elegant in appearance with a proud carriage. Very energetic, alert, watchful, fearless and loyal. The height should be measures at the withers with males being 26-28 inches and females being 24-26. The head shape should be a wedge with almond shaped deep-set eyes. The bite should be even with a total of 42 teeth, 22 lower and 20 upper. They should have a scissors bite being neither over nor under shot. The neck should be well muscled and well arched. The chest should be broad with the withers being the highest point of the body. The ribs should be well sprung from the spine and a narrow waist. The tail should be docked at the second joint. The feet should be well arched and compact, catlike and not turn in or out. The dog should appear to be standing on its toes. The coat should be short, hard, thick, and lay close to the body. The only colors that are allowed by AKC are black, red, blue, fawn (Isabella). Marking are rust on all dogs and should be sharply defined. A white patch on the chest of not more than ½ Inch Square is permissible but not desired. A disqualifying fault is a dog of any other color. When the dog moves his gait should be driven from the rear legs. Louis Doberman developed Dobermans in the 1890’s.

Dobermans are prone to some health problems. These include; von Willebarnd’s disease, which is a bleeding disorder. Bloat, which can be fatal very quickly. Liver disease, spinal problems, hypothyroidism, and cancer. When choosing a puppy you should ask what genetic testing has been done on the parents and see what type of temperament they have.

He’s housebroken, he’s good with kids. I’m not into that competition obedience stuff. Why should I bother with obedience training? Besides, I don’t have the time.

There are many folks out there that have never taken the time to “really” obedience train. Perhaps the puppy classes were the extent of any training the animal received and from that point on, little if any other training followed. These are Dobermans we are dealing with.

All dogs have their own personalities. The Doberman’s complexity and varying degrees of drives (prey & defense and levels of activating thresholds) stemming from various bloodlines make these animals differ GREATLY from many other breeds.

Teaching the dog the tools and skills to deal with the Doberman’s complex personality just makes good sense, just like you teach children manners. You want your dog to be functional in your social setting just like your kids. Well, you’ve gotta teach ’em manners if you want ’em to be good citizens.

What does a “good citizenship” level of obedience training encompass? It equips both you and your dog to function in socially acceptable ways, especially when you’re confronted with unexpected situations. You want them to recognize you as boss, although a very gentle and kind boss, and that you can handle situations they’re not sure of. That can save your Dobie meeting the unexpected with an attitude and behaviors that could cause any dog problems.

Those basic SIT, DOWN, HEEL, STAY, etc. commands really teach your dog to confidently submit to your direction without creating a confrontation. You’re the leader, the alpha. Look what happens when an alpha dog approaches a subordinate dog. The alpha gets submissive gestures from the subordinates (muzzle licks, rolling on their sides/back to expose their underside, etc.). This doesn’t mean that when your Dobie licks the ice cream off your kid’s face that he’s being submissive — just greedy.

Is A Doberman The Right Dog For Us?

The Dobermans appearance attracts attention and most are bought because they are beautiful. But beauty is as beauty does. Dobes must be trained or problems will develop.

Dobes are bought and people let them do what they want and by the time they are adults they are spoiled. Many end up with behavior problems and then end up in rescue. These are willful, intelligent dogs and if they see a loophole they will go through it. They need a high level of stimulation because otherwise they will get bored and become creative and destroy things. Dobermans ask “Why?” They really are to smart. They are not good dogs for busy people who cannot give them enough attention. They will test who is in charge all the time and if you are not in charge they will be. The problems will escalate from there. Training is a must as is socialization. Once you have established who is in charge your dobie will be the best friend in the world and loyal to the end of time.

Are you ready for a Doberman?

Help us rescue Dobermans from shelters, owners who cannot or will not provide for them and those who are strays whose owners never try to locate them. Your donation is tax-deductible. 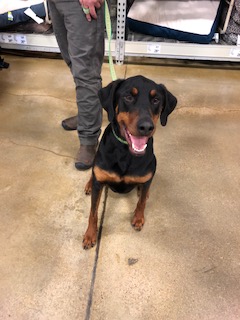 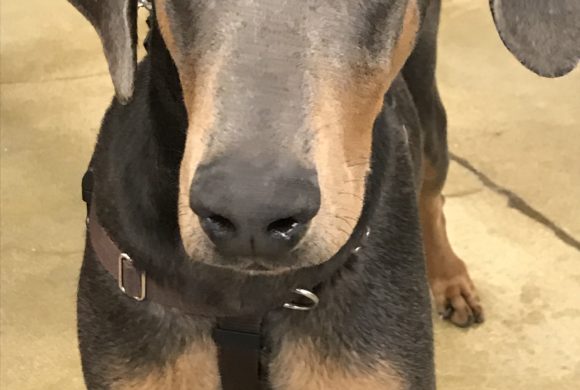 My name is Sam and I am estimated to be about two years old.  I... 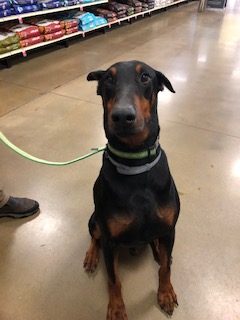 THIS IS AN UPDATE AS OF 2/8/20 THIS PRECIOUS BOY HAS COMPLETED HIS HEARTWORM TREATMENT...